The explorers hitched Apple up to the buggy, and returned it … and the teenagers … to the town of Foxfield. The Town Council meeting convened at 7:00, the church (which served as the council hall) was filled to capacity, and even a little bit more.

Barnes led the session from a wooden lectern. The three council members sat impassively at a long wooden table. Two major factions of townspeople - those for logging the northern forest and those against - sat on separate sides of the aisle. At the behest of the louder, pro-lumber half of the crowd, a vote on the Cressfield Lumber matter was called.

Constable Richard Slate once again voted against the measure.

Shirley Suttler, a 30-year-old with a pleasant disposition, changed her vote to “Yes”.

Before Zeke Copely could vote … with certainty, a “Yes”, which would have passed the matter … Barnes banged his gavel for the two day period of “cooling off” before proceeding. Copley’s brother, Ike, whooped and catcalled from the audience. The once-shepherds-turned-farmers amidst the rocky terrain north of the town were growing closer to an economic boom from the harvesting of timber.

Oxford seemed unusually put-out when the council made it clear that his offer on the mill would not be debated until after the vote, and threatened (to no avail) to reduce his generous bid on the old building.

“Gentleman” Jerry escorted Agnes back to the rooming house, and the group decided to take the stolen newspapers with them, lest they be found sitting in their rooms, evidence of their break-in.

They discussed waiting a day or two to try to confront Barnes at the waterfall cave, but Jerry would have none of that. He raised his hand.

“Och, I’m goin’ to the cave to wait for our friend - tonight” - “Gentleman” Jerry

The rest agreed, and they made their way to the lush growth of the waterfall by lantern and headlamp, and lay in wait for the Councilman. They didn’t have long to wait, their lights shuttered, as they saw a lantern approaching, borne, as expected, by Barnes, who notably also bore a five-sided rod made of stone.

The party followed him into the cave, through the waterfall, using the water’s noise to cover their footfalls. They tackled Barnes, as Aaron took a lightning bolt to the chest. Pointing lights up, they espied an odd human-sized lobster-insect-bat-fungus being hovering above, variegated colors shimmering. It bore a stiff length of wire, attached to several evenly spaced crystals. Jerry stood over the supine Barnes, grasping his axe, the stone “key” stuck through his suspender straps. 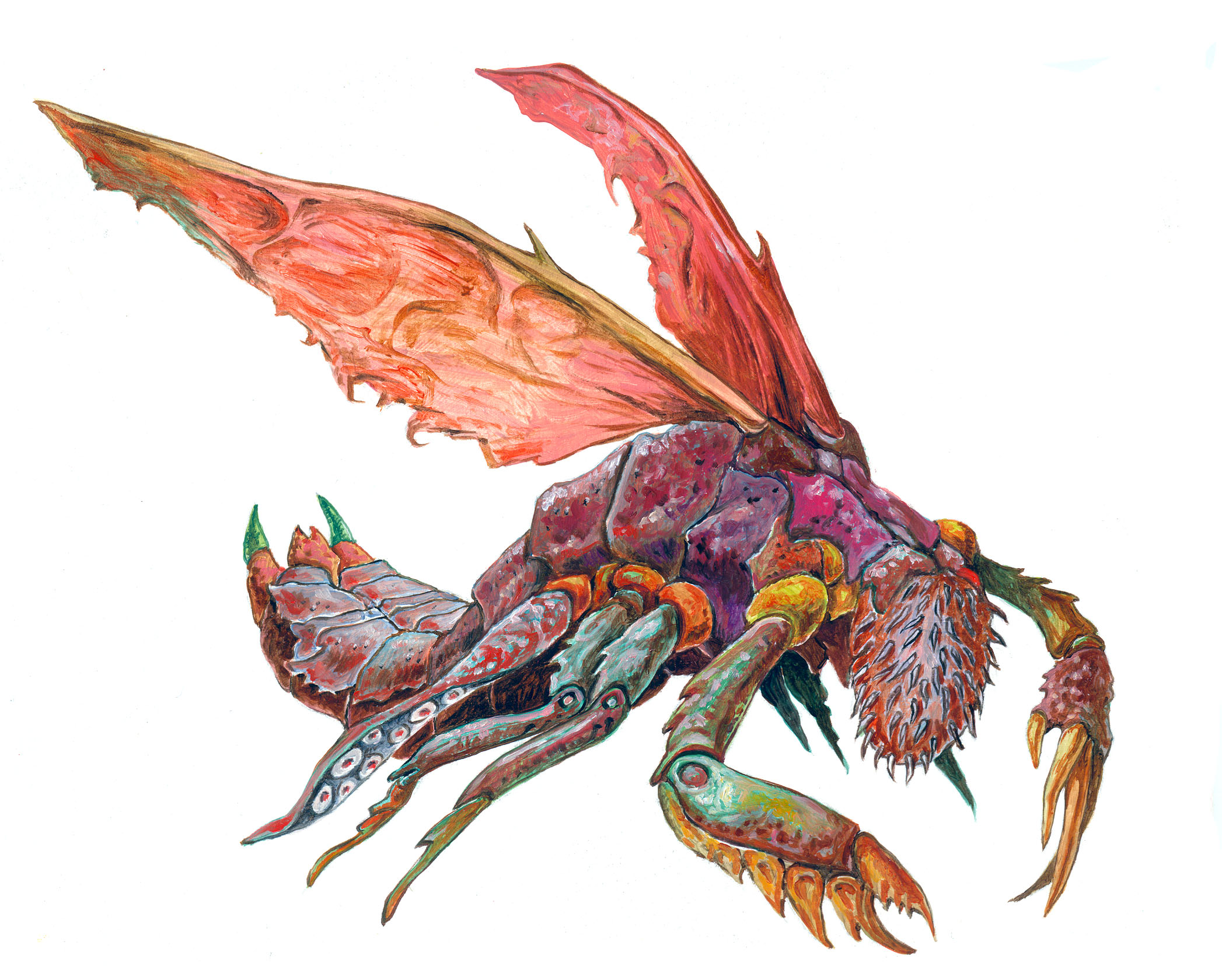 Skinny Larry aimed his revolver for a shot, but his gun jammed. Ox flung his heavy red jacket at the creature, hoping to catch it in a makeshift net, but missed badly and slipped on the wet stone floor to boot. Aaron fired a shot into it, then applied a healing salve to his scorched flesh. The bullet had pierced directly through the creature, with little to no effect. It trilled, and shot through the waterfall to the outside of the alcove. Larry followed it, gun readied, and spotted the creature flitting amongst the trees, preparing to re-engage.

As it flew back into the round cave, Jerry swung his axe but missed. Ox, realizing he had a proper mosquito net in his jungle expedition kit, dug it out of his pack. Stretching the net across the cave mouth, Aaron and Ox managed to entangle the creature. Pinning it, the group demanded an explanation from Barnes, but all he could do was gibber nonsense. So they unceremoniously killed the creature, opened the door with a twist, and crawled through a short, pentagonal-shaped tunnel. The creature was like nothing any had seen before, except Barnes, who apparently had some sort of ongoing relationship with its kin. Was it an extraterrestrial alien? An exotic creature from lands unknown? A faerie?

Opening a door at the far end, the explorers entered a large cavern. In its center was a five-level step pyramid, at its apex, two tusk-like protrusions mounted and pointed at each other, somewhat offset in height. Six of the aliens flitted about, tending to large metal machines with blinking lights. One was larger than the rest.

Barnes rushed forward and collapsed, crying upon one of a pair of large square boxes. On the other side stood five large test tubes, slightly aglow, full of some foul liquid.

One of the creatures flew between the horns, folded into two dimensions, and vanished. A portal! The combatants surmised it would return shortly with greater numbers.

The men sprung into action. Ox and Jerry leapt up the inverted ziggurat, dodging insectoid attacks, where Jerry struck one of the spikes with his axe. Ox wrapped his trusty net around the span - hoping to prevent the creatures from escaping and/or returning with reinforcements.

Aaron drew his machete and went toe-to-to with the large leader. “Mi-gos”, he mused, drawing upon the myths and tales he had read some time ago. The rest of the group had no idea what he meant. “Well ok then, you goes!” Ox shouted in confusion.

Larry began studying the array of buttons and levels. After a fruitless attempt to comprehend the device, he fired his revolver into it, causing it to spark and whir.

Once the creatures were dealt with (two escaped back down the corridor and out into the world), mostly due to Ox’s and Aaron’s brutal weapon attacks, the two boxes were opened, revealing the sub-zero interiors where Barne’s two children lay, dead, their brains missing. After sundering one of the horns, Jerry bashed the test tubes, each containing a growing sickening mockery of the human form.

Larry urged the group to grab Barnes and the kids and leave, as a self-destruct sequence seemed to have been initiated. With haste they left, and once outside, the ground shook from a tremendous subterranean explosion.

They decided to return Barnes and his children’s bodies to town, without fanfare, and left for Boston, as suddenly as they had arrived, leaving the beleaguered townsfolk to draw their own conclusions.