Gin and Miskatonic
Role playing in the World of Lovecraft
Home Episode 3 - To the Wilds of South America - June 12, 2022
Post
Cancel

Preamble: A visit to the Asylum to pass good words and religious paraphernalia to the insane husband and his somewhat more mentally sound wife. She may be able to go back into society at some point.

Preamble: Yardwork to make the Corbitt house more pleasant to view from the street.

The loosely-knit team of former members of the armed forces, after each pocketing $10 from Knott for de-ghosting the Corbitt house, was presented with an opportunity for international travel. Ritter shared a newspaper article describing a visit to a Peruvian archeological site to search for ancient items of antiquity. His associate from years gone by, Augustus Larkin, was an explorer and was interested in sponsoring the team to assist in the dig.

Targeting a date in March 1921, Ox persuaded the group to travel by ship rather than by plane. This would give them the opportunity to witness first-hand the operation of the recently-opened Panama Canal. Upon arrival they were to seek out Larkin after checking into the Hotel Maurie.

To pass the time on this two-week journey by sea, several of the “more literate” team members took to studying the Spanish language. “Skinny” Larry and “Gentleman” Jerry passed their time learning about the ship’s operation, from a mechanical perspective. They met a young priest traveling for mission work, and shared with him the task of learning basic Spanish. Jerry spent down time with him praying, seeking guidance, and singing hymns from his old hymnal.

Upon arriving in Lima, Peru, the squad checked-in at the Hotel Maurie and met Larkin and two other men in the hotel’s airy restaurant for dinner.

There was apparent tension and “bad blood” between assistant de Mendoza and folklorist Hughes. 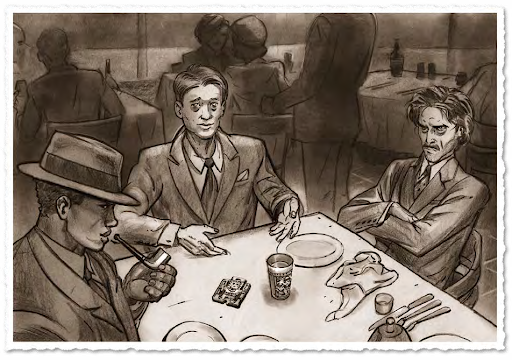 Larkin described a ten-day foray consisting of a few days’ travel in three trucks followed by a few days on burros. The launch site will be a village named “Puno”. He let the squad purchase items they required; Jerry purchased road flares, a handgun, long gun, and ammunition. Ritter acquired some rope and lanterns. Ox stocked up on medicine/pharmaceuticals to treat the expected jungle maladies like malaria, dysentery, etc.

Larkin’s gotta be cursed, probably stole a relic from some long-dead Pharoah!

Dinner was excellent, consisting of fresh-caught fish from the Pacific Ocean and free-flowing locally produced alcoholic beverages. After dinner the adventurers sat with Jesse Hughes for a drink or three. His lips loosened a bit by the libations, he related his real name, “Jackson Elias”, and was a somewhat well-known author on books of the occult, listing, among others:

Judging the explorers to be men of good character, with some exposure to the unexplained, Jesse/Jackson related that an associate of his, one Professor Nemesio Sanchez, was interested in the expedition but Larkin would not return his phone calls nor offers to add his expertise to the effort (consisting in part of notes and documents regarding the dig site). Wishing to perform an introduction, they decided to meet the following day at a local Archeological Museum, where Sanchez worked in some administrative capacity.

Jesse/Jackson made overtures about joining forces with this crew in order to uncover some of the mysteries of the ancient pyramid rather than the wholesale plunder of its riches and artifacts espoused by Larkin (who was, by his own admission, deeply in debt). Downing the remnants of their drinks, they went off to get a good night’s sleep.

I stripped my bed to the mattress, looking for a snake, scorpion or spider. Check your boots, boys!

The next morning, upon arrival at the museum, Jesse/Jackson guided them to Sanchez’s office. Sanchez explained that his assistant, a woman named Trinidad Rizo, was in the basement retrieving some items related to the dig site. Jerry helpfully left in search of the basement stairs, hoping to help carry any bulky items for the aide.

He did find Rizo, dead and dessicated with a wound on her throat, half-buried in items tipped upon her from a shelf that loomed over the corpse. He pocketed her small notebook and stuck a gold “pipe” inscribed with sigils and hieroglyphs, found in a broken, straw-filled crate, into the back of his belt. Then he scooped up her dead form to return to Sanchez’s office. 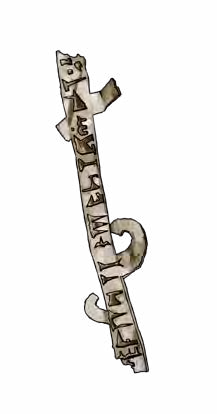 The strip of worked gold found in the crate

Upstairs, a shrill cry alerted the remaining team members, who rushed out front of the museum and down its stone steps, to provide aid to some unknown source. It was a ruse. No passers-by had heard or seen anything.

Upon reaching the office, Jerry espied de Mendoza pinning the older Sanchez to the floor, and appearing to try to kiss the administrator. Dropping the corpse, Jerry rushed to knee the assaulter in the side of his head, but tripped upon (and became entangled with) an upholstered chair. De Mendosa took the opportunity to complete his attack and escape through a window (the office was on the first floor). As the others arrived, it was apparent that Sanchez was infected by a parasite that appeared to be moving under his skin, causing agony to the poor chap. Aaron and Ox attempted together to provide a remedy by poisoning the parasite, but were without success. Jerry plunged a silver-plated letter opener into Sanchez’s abdomen, a shallow stab, but failed to pierce the parasite.

Chasing de Mendoza proved fruitless, the man had the advantage of knowing the surrounding streets and city blocks and leveraged these to effect his escape. Larry and Jerry returned, sweaty and breathing heavily.

An ambulance was summoned (for the writhing Sanchez), followed by the police (for poor Trinidad). The gaping wound in the latter’s neck went unexplained.

“Jesse … Jackson … if you betray me, I’ll hunt you down and kill ye, just as I’ve done three times past”

The notebook described mid-sixteenth-century Conquistador Gaspar Figeuro, who was one of the explorers of the site near Puno. Jerry collected the papers and photos that had originally occupied Sanchez’s desk but had been strewn upon the floor. Examining the gold rod, reinforced by information gleaned from a second trip to the basement, it was related to the explorer Franciso Pizarro, as well as the aforementioned Gaspar Figeuro.

It also mentioned one Luis de Mendoza, a traitor, who was shot in the head. These events transpired some 380 years in the past.

“Och, that isn’t one of OUR de Mendoza’s ancestors, and it ain’t no random chance name. It’s the SAME de Mendoza, the bastard’s four hunnert years old!” - “Gentleman” Jerry O’Shea

The gold pipe was inlaid with geometric patterns and glyphs, with odd pieces jutting out perpendicularly. It seemed to be neither a weapon nor scepter. 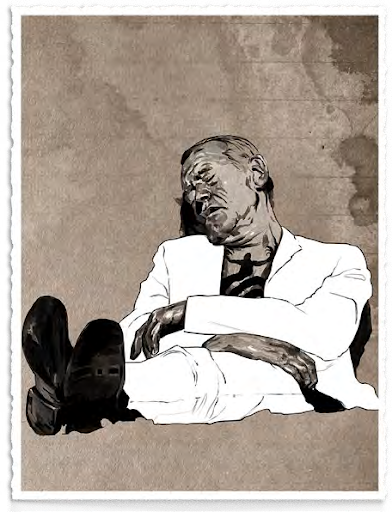 Larkin at rest, his tattoo visible

It was time for answers, and the source seemed to be one Augustus Larkin. Intruding into his room (at a different, shabbier hotel than the Maurie), they found him high on heroin, which explained his physical deterioration more … “scientifically” … than a mummy’s curse for stealing an ankh or similar relic of antiquity. It did not, however, explain why Larkin smelled of rotten meat; he seemed to not show any open, weeping sores or such. The drug use seemed to mimic the symptoms of Malaria - weight loss, sweats, a notable pallor - the whole business was terribly confusing.

“Och, if I smelled like rotten meat, I’d shower in cologne too!”

When told of the death of Trinidad Rizo and the assault on Sanchez, Larkin vomited bile and small amounts of undigested food into the toilet.

He babbled about a Death Cult of a Vampiric Monster named the “Careeserie”, but provided very little in terms of de Mendoza or any ulterior motives for the archeological dig (even under threat of being tossed out of the fifth floor window, or a quick punch to the gut). De Mendoza had signed on to the expedition as one knowledgeable about the location of the site and environs, and met him for a meal once a day or so.

The five explorers gathered about the supine form of Larkin, glaring at him while he rested uneasily upon his bed.