Gin and Miskatonic
Role playing in the World of Lovecraft
Home Episode 1 - The Rats - May 15, 2022
Post
Cancel

The group gathered around a smoky table in a Boston tavern with a member of their former army company, Arnold Knott. Knott had inherited a Boston home from his uncle and has been unable to rent or sell it. The history of this old but with “good bones” house involved a married couple who went insane and were committed to a local asylum.

Oxford knocked on the front door with his peacock-handled walking stick. No response. Upon entry, the investigators noted a long hallway ending in stairways leading up to the second floor and down to the basement. A perimeter search around the house revealed front and side doors and a door to a coal chute, securely nailed shut. The grounds certainly looked to require some work as it was quite overgrown but otherwise unremarkable.

The entry level contained two storage rooms, a mudroom (with the side door), a kitchen, dining room and living room. The power was out, but inserting a couple of fuses and flipping the master power switch in the fuse box resulted in lights powering on. Extra fuses from a drawer were left in the box for ease of finding later.

The primary finding on this first floor was a free-standing cabinet, nailed shut, containing a stack of diaries penned by one W. Corbitt. (Deceased, 1866.)

The second floor contained three bedrooms and an unremarkable bathroom. One bedroom appeared to be for two small boys, while the spare bedroom had a heavy bed frame but no mattress. Crosses and other religious items were displayed conspicuously in the master bedroom. 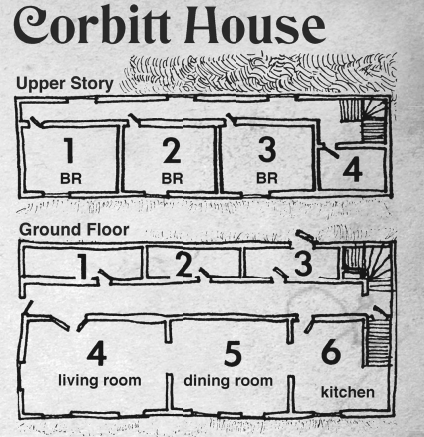 As the group prepared to descend rickety steps to the basement, they were alerted by a few loud thumps upstairs. As they entered the spare bedroom, whose door was opening and shutting, thought to be caused by the group’s attempts to let fresh air blow through the musty abode, Jerry was almost struck by the bed frame as it hurtled across the room.

Aaron and Jerry felt their sanity slowly slipping away after witnessing the bed flying on its own. Oxford was skeptical that the bed moved “of its own volition” and checked for a hidden spring or some other mechanism. While searching Oxford was struck by the same piece of furniture as it returned to its original position. No mechanical cause of its animation could be determined and Oxford now also believed that the bed moved on its own. Jerry grabbed two of the larger crosses from the master bedroom and placed them around his neck.

As they prepared once again to descend to the basement, Ritter left to speak to any neighbors and businesses nearby.

The stairs were dangerous and fraught with peril. (So much so that Ox declined to go down then, and he went to the foyer to read the Corbitt diaries. ) Aaron lit his lantern providing 360 degrees of illumination and handed it to Larry. He had a carbide headlamp as well. The basement lights kept going out and each time Oxford replaced the oddly missing fuse, it was soon found to be missing again. Jerry placed a cross in the fuse box but it didn’t help. The spare fuses lined up, ready for use, were missing as well.

The floor was littered with debris, including some lumber, nails, screws, and tools.

They opened a door in the basement, revealing the delivery end of the coal chute, faint light filtering in from the closed hatch, above. Jerry picked up a trash can lid to use as a makeshift shield and a sturdy axe. Larry borrowed a brick-layer’s hammer and began tap-tap-tapping on the stone-tiled floor, looking for the means to go a level deeper. Jerry started to pull down old paneling.

An ornamental dagger with a curved, rusty blade arose of its own volition, but was kept in check by Aaron and Jerry, who drove it, spike-like, into one of the exposed studs with the butt of the axe. Nevertheless it started to shimmy loose, so Jerry struck it, attempting to snap off the hilt.

Upstairs Oxford, who had been reading the diaries, rolled up a dusty area rug and brought it to the top of the stairs, hoping the heavy fabric might entangle and corral the dancing dagger.

The knife pulled free, though somewhat bent, and flew to a position across the room. Aaron and Larry fled up the stairs, whereas Jerry approached the dagger, axe at ready, and split it in two with a heavy blow. The pieces fell to the cluttered basement floor and moved no more.

Undeterred, Jerry continued his task of trying to find a secret door by the method of brute force, tearing down more soft, aged pieces of wood paneling. Though the others had retreated up to the relative safety of the ground level, they reached the lantern down to light up the basement.

Upon tearing down a particularly soft piece of paneling, he revealed a five-foot deep recess terminating in a wooden wall, occupied by several dozen angry rats who scurried over his form, biting, rending, and tearing his flesh. He retreated with a yelp, staggered up the steps with his remaining energy, and was treated by Aaron. After which he was driven by Aaron to the VA hospital for stitches, application of antiseptics, and intravenous treatment to combat disease, swelling, and infection.

The others decided to take this time to read the diaries and investigate the property deed and chain of ownership of this odd property, by consulting county records and newspaper articles. Ritter had spoken to the proprietor of the cigarette and magazine shop, who related that the place made him feel uneasy, to the point of crossing the street in the evening rather than passing too closely. He also gave more information about “The Corbitt House”.